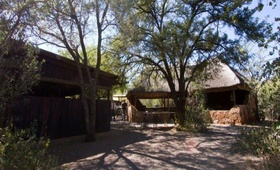 Madikwe is South Africa's fourth largest game reserve at 75 000 hectares. This magnificent malaria free area offers you the opportunity to experience the magic of the Big Five and a true safari adventure. Situated in the North West Province bordering Botswana, Madikwe is just a 3½ hour drive from Johannesburg or Pretoria, 1½ hours from Sun City and an easy hour from Gaborone.

Managed by the North West Parks and Tourism Board and together with the private sector (lodge owners) and the local people, Madikwe is operated as a joint venture to stimulate ecologically sustainable economic activity based on wildlife, for the benefit of the people of the region.

This community involvement thinking was something of breakthrough in the early 1990's when Madikwe was formed, and has served as a template for other game reserves to work from. It has also ensured a healthily inflated local employment rate in Madikwe.

The Madikwe area is steeped in history and tradition. Historically, this is Herman Charles Bosman's land – you can easily visualize his Oom Schalk Lourens sitting under a Karee boom, contemplating the finer points of life or recovering from the alcoholic delights of its berries. The famous Mafikeng Road runs straight through the Reserve – explorers, traders, hunters, missionaries and, of course, Mzilikazi passed this way during the making of South African history.

Today Madikwe is regarded as one of the finest conservation areas in Africa and has taken its place as South Africa's top wildlife and game viewing destination.

The wildlife is extensive and impressive.  With the Big Five (lion, leopard, elephant, buffalo and both black and white rhino) plus the extremely rare and endangered wild dog and cheetah and almost any other predator you can think of, a multitude of plains game and the latest bird list boasting 340 species.

Mosethla is very proud to be a part of the important Madikwe conservation initiative and look forward to welcoming you to one of its best kept secrets – the little Bush Camp where you really get the dust of Africa on your feet!

The Madikwe Game Reserve is a malaria free park.

​The Pilanesberg is a well known South African Game Reserve situated in the Mountainous remnants of an ancient volcano. The Volcano is one of only three of its type known, to exist. It is an "Alkaline Ring Volcano". When it was active over 490 million years ago it was one of the highest in Africa but the structure has eroded down to the rugged, high hills we know today. The volcanic soils, altitude and rainfall make this a unique ecosystem and the decision to create a game park in former farm lands has proven to have been an inspired one. The park is now a complete and well stocked reserve and justly famous for its fantastic game sightings, comfortable climate and spectacular views. There are several private game lodges as well as the Parks Board camps.


The road network is extensive and takes one through all the different ecological zones along 200km of gravel and  tarred roads. There are numerous streams and dams within the park these offer bird watching and sightings of aquatic animals. The variety of animal species found here rivals that of bigger parks as do the bird and plant species. The Pilanesberg is a popular birding destination and it lies on the central/western migration route that is followed by raptors, storks and many other migratory bird species, many of which chose to remain there for their summer sojourn. There are several animal specials that make the Pilanesberg a good park to visit, such as the rare Brown Hyena, both black and southern white Rhinos, Kori bustards as well as good opportunities for leopard sightings. This is due in part to its unique location on overlapping eco zones between the highveld/ middleveld; the drier, western Kalahari sandveld/moist bushveld and Northern bushveld/highveld grasslands.

The Pilanesberg is close enough to JHB/Pretoria to make it easily accessible yet far enough to give any trip out there the feeling of being in a far more remote area. This reserve is one of our favorite parks and one we know very well. It is also easy to see game all through the year, high grass or thick bush do exist but these do not prevail all over, the park is gorgeous all year around.


The Pilanesberg is a malaria free park.