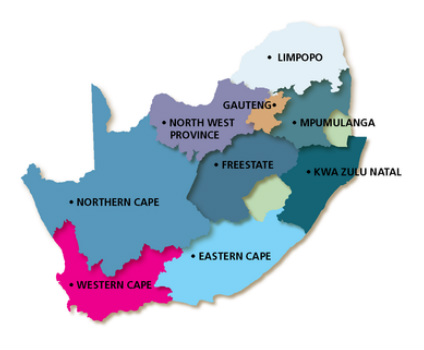 The Western Cape is roughly L-shaped, extending north and east from the Cape of Good Hope, the southwestern corner of South Africa. It stretches about 400 kilometres (250 miles) northwards along the Atlantic coast and about 500 kilometres (300 miles) eastwards along the Indian Ocean coast. It is bordered on the north by the Northern Cape and on the east by the Eastern Cape.

The Western Cape is exceptionally topographically diverse. Most of the province falls within the Cape Fold Belt, a range of sandstone folded mountains. The far interior forms part of the Karoo Basin and is generally arid and hilly with a sharp escarpment in the north. Coastal areas range from sandy between capes, to rocky, to steep and mountainous in places. The Western Cape is also the southernmost region of the African continent with Cape Agulhas as its southernmost point, only 3800 km from the Antarctic coastline.